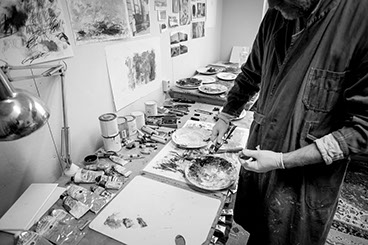 The Chemistry of Painting

PROFESSOR AT THE ICELANDIC ACADEMY OF THE ARTS

In my mind the art of painting is nothing but an alchemical process – the magic of infusing matter with spirit and heart and that part has to be true in order to be beautiful. If you can't paint from the heart you can't paint at all. If you are not driven by the inner light – the vision of unborn reality – you are not really creative. That formed the core of the Romantic movement of the 19th century and that is also a timeless understanding of creativity. This innate but so often suppressed intuition dares the soul to go beyond what the eye can see. In my mind that is what Caspar David Friedrich, the icon of 19th century romanticism, meant; "The pure, frank sentiments we hold in our hearts are the only truthful sources of art. A painting which does not take its inspiration from the heart is nothing more than futile juggling."

This is exactly the way Páll Sólnes paints and he has always painted with emotional intensity. The core in Sólnes’ paintings is the light, often bursting into flames from a point between the sky and earth materials. He observes landscape intensely and his acute visual observations of form, space and colour in nature are part of the visual memories he draws upon while painting, what one colour does to another and what these colours do to each other in terms of space and interaction. The earth in his paintings is represented in dark umbra pigments, burnt and raw, while the sky is depicted with king's blue light, cobalt blue, French ultramarine, intense turquoise or turquoise blue. A single flourish of a bright colour found nowhere else in the painting seems to anchor and create equilibrium in the whole composition, most often based with permanent carmine, Indian yellow or perhaps permanent yellow deep on the top.

But the manner in which he expresses himself is more complex than just the way of romanticism. He can easily be classified as an abstract expressionist for at least two reasons. One is about spontaneity or the impression of spontaneity and the other is about spirituality. Abstract art clearly implies an expression of ideas that relates to a spiritual essence, the unconscious and the mind. Although the term "abstract expressionism" was first applied to American art in 1946 by the art critic Robert Coates, it had been used in Germany in 1919 in the magazine Der Stürm regarding German expressionism. In the United States, Alfred Barr was the first to use this term in 1929 in reference to the works by Wassily Kandinsky. This should remind us that all the main pioneers of abstract art, Piet Mondrian and Kashmir Malevich, were deep into theosophy. The source of their fundamental creativity is spirituality.

So far, the spirit of our times since the turn of this new century has not been so much about something fundamentally creative or "new". It has been a creative period, of course, but in a different way. It has been about manipulating existing forms and ideas; putting them into new contexts or seeing them from new or different points of view. The statement seems to be that ideas are not in themselves original – it is just the way that we process, execute and perform them that makes the artwork original and, at the same time, personal or not. We have in many ways dematerialized the art object. Even by stating that painting is dead! This question was once asked in art school and the old wise teacher scratched his head. "Dead? How can it be dead? Painting is just a medium like video art or installations. It does not matter what kind of medium you use – IF you are expressing something of a true nature.”

If you can't paint from the heart - you can’t paint at all also means if you can’t PLAY from the heart you can’t play at all! You’ve got to place the emphasis on the spontaneous, the instinctive forces. We can, of course, trash all these classifications and categorizations of 19th century romanticism, abstract expressionism etc. Yesterday is like another country – the borders are now closed. Emptiness, white canvas, tabula rasa, nothingness, "earth was found nowhere nor the heavens above". An opportunity for creation, here and now. An imaginary line is drawn, often slightly tilted, representing an horizon that reflects heaven and earth, between the vertical boarders of two-dimensional space, harmonies of blue notes, from the light tones of King's blue and deep rich blue in the background and earthly colours in the foreground. In the mid-ground the focus is on a glowing splash of permanent carmine red with a tad of yellow or white. You look into the light and a new life is born.

Such is the nature of improvisation. "The key to creativity is a bad memory," Miles Davis once said, which reminds us of the forces of improvisation. But behind all geniuses, like Miles, are tens of thousands of often-painstaking hours. Páll Sólnes was born in northern Iceland during the fifties of the last century. We come from the same neighbourhood and have known each other since our teenage years. Looking directly towards the east from the tower chamber of Páll Sólnes’ childhood house in his native town once can see a smooth mountain with rocky cliffs, not at the top but in the middle part of the view one gazes at towards the east. That gaze line is hypnotic and Sólnes once painted that view for me in warm and hot colours. This gaze line also marks the sunrise. Even then Páll was obsessed with the sun and at his first exhibition in the early seventies in the basement of our college he hung an ink drawing with the title "Sunrise seen from the viewpoint of the sun itself", with shadows falling away from the gaze line. The world inside you is reflected by the world outside you. Páll Sólnes now works in solitude far away from his subject in the flatlands of southern Sweden and paints only what he sees within himself.